An installation, featuring an immersive dazzle camouflage space, optionally involving a performer, and reflecting on the involvement of art and artists in military industrial complex.

The dazzle camouflage — was designed and painted by artists on the surfaces of naval ships. This peculiarity, which emerged in the evolution of military industry, is picturesque as much as it is revealing the absurdity of the war machine. It was not only prepared, but also depicted by the artists of the era, and it is still widly referenced.

The installation can be realized in many variants, depending on the space and conditions. For example the outside of the ship or one of the rooms inside could be covered with this pattern:

Our aim is to engage the visitors into the playful experience of optical illusion.

The room is completely dark with one spotlight traversing through the dazzle patterns. Therefore the visitor see only certain parts of the stripes revealed — the experience referencing binocular view of the torpedo aiming device.

If the performer is involved, the costume would be the extension of the pattern (including the adequate face paint) and sometimes parts of the performer's body would appear in the spotlight as well — resembling the war dynamic of a hunter and the one being hunted.

There is a heavy black curtain in front of me, covering the entry, am I supposed to enter? Next to it I see a photograph of a massive ship which looks like a military vessel, but it's covered in a weird zebra-like pattern. I push through the velvet of the curtain to enter this space. It's very dark in there, but there is a spotlight, a search light traversing the walls and the floor. It's slightly annoying because of the black and white stripes continuously revealed in the circle of light. But there is something more in there. Some object which I can see for glimpses of time. The pattern is bending the space, so at the beginning it's impossible to tell what it is. After a while I see it is a human dressed in the same pattern. The "zebra" camouflage makes it uncanny ...

The industrial revolution was not only producing civilizational advancement, but also the machines of destruction. The installation is trying to metaphorically meditate on this subject, while using the original camouflage aesthetics in a more surreal setup. Being hidden in a plain sight is an apocryphal reference to the iconic Hito Steyerl's How Not to be Seen. A Fucking Didactic Educational .MOV File. The title of the installation — Civilizational Habits — is borrowed from Peter Zelenka's film The Buttoners, where the urge for using nuclear weapons of mass destruction is subtly connotated with fetishism, ambition, ordinary civilizational habits and cultural scripts.

Any kind of interactive projection immersing in the phenomenons of industrial process.

Kazik loves feedback loop shaders. It brings the experience closer to naturally occurring processes. The steam, fire and water can be visualized in surreal representation in response to how the machine is sensing the space — the movement of human body and the surrounding sound. Therefore feedback as a projection can be tuned into any immersive experience, projected on the wall, ceiling, or floor, according to the narrative.

For example the background of this website is a very quick attempt to achieve steam like movement shaped by procedural cog of some imaginary machine.

This website, which acts as a presentation of our ideas, can be transformed into a regular website of the project. It is based on the engine running xemantic.com. It emerged out of the need of presenting art online, in the time of social distancing, where expression of creativity has to compete for the attention span with movie streaming platforms. It puts visual content first, within open composition based on golden ratios, and responsive design scaling dynamically to any imaginable resolution and loading as fast as possible. The engine is being published now as an open source project.

The aesthetics of the beginning of the XXth century is brought back with typography — Vidaloka typeface of headings, with baroquesque peculiarities, and Frank Rühl Libre — an open source version of the typeface designed in 1908.

This particular design reflects on the connection between elephantiasised form of the fading victorian era and minimalism of upcoming modernist geometrical structures. It can stay mostly monochrome, with a slight touch of chromatic aberration producing an illusion of space, or turn into explosion of steam, fire and steel. The shader in the background can be interactive, reacting to the mouse movement.

Pumpernicki (Dominique Schwenner) wears many hats. She is a tribal fusion belly dancer first trained in traditional Egyptian, singer, writer, arts manager and producer. She believes that art is powerful in every form and swears by its therapeutic healing. She was inspired by and pulled towards belly dance at age 5 in Morocco where she ran on the stage to join beautiful belly dancers. In Middle School that spark was reignited where she ran a weekly belly dance club. That spark seems to be an eternal flame. Pumpernicki's passion for the arts has manifested in more than a decade of arts management experience in New York theaters in arts in education, company management and programming. She joined the Sisters of the Blooming Sun, a non gender specific dance community, in 2016, dancing at festivals, clubs, private events and more. Now she is branching out in Berlin to expand the sisterhood in dance community through Sisters of the Waking Moon and shares the New York City vibes by producing Mermaid Parade Berlin, an immersive theater project on the Berlin Canal. 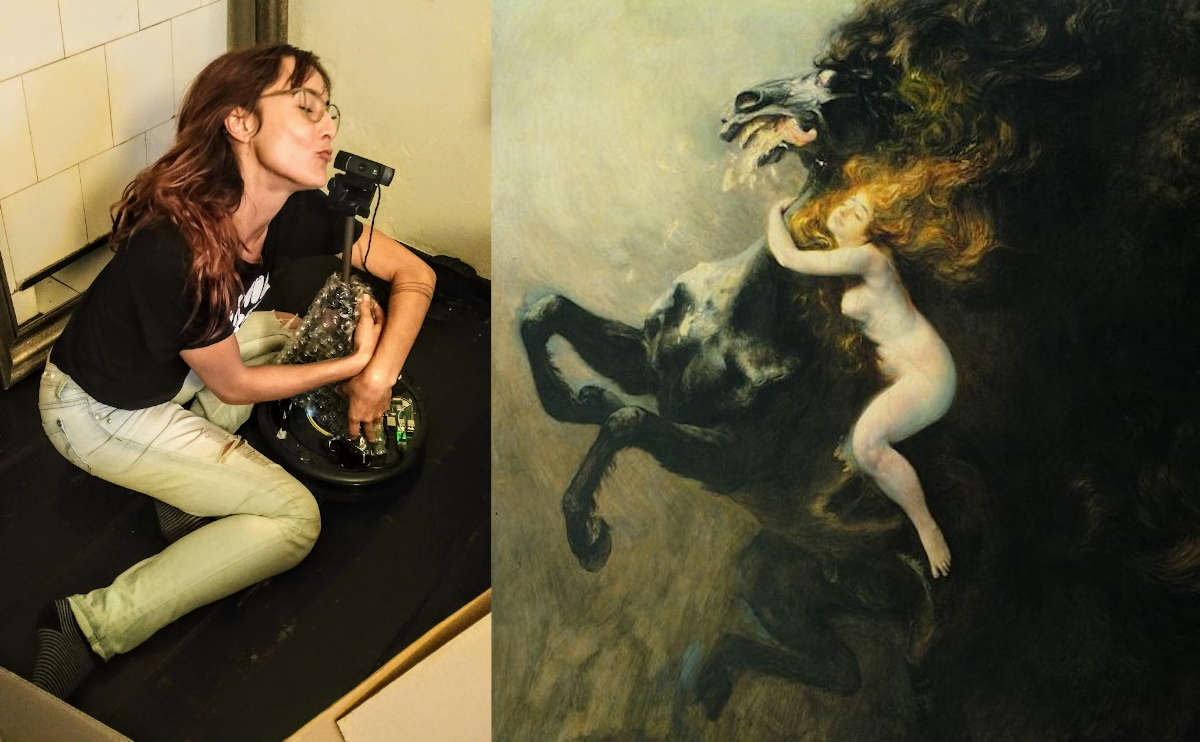 Shumi, the avant-garde ballerina, the architect of bridges in the world of ideas and a true nomad at heart (lived in 8 countries, 13 cities). Graduated from the BDES Design and Digital Arts program at the Edinburgh Napier University and the Master in New Media at UvA (Amsterdam University). Did her traineeship as a bicycle designer for Veloretti.com and worked as a Creative Lead for They international advertising agency and a cross-disciplinary designer for the Dutch (innov8rs.co) and the German (afce.co) network of incubators. Last year was part of the Décor Team for two Irish festivals: Body & Soul and Another Love Story. Passionate about art, crafts and theatre and a trained dancer. Finished a ballet academy as a kid, studied flamenco full-time at the Fundación de Arte Flamenco in Sevilla and last summer toured Portugal with a conceptual dance theatre show accompanied by a live ethnic orchestra to showcase the work from the art residence conducted by the Music & Dance Association Portugal, performing e.g. on the main stage of the FMM Sines (Festival Músicas do Mundo). Currently indulging in plotting a new religion, aspiring to dissolve collective ego through art. 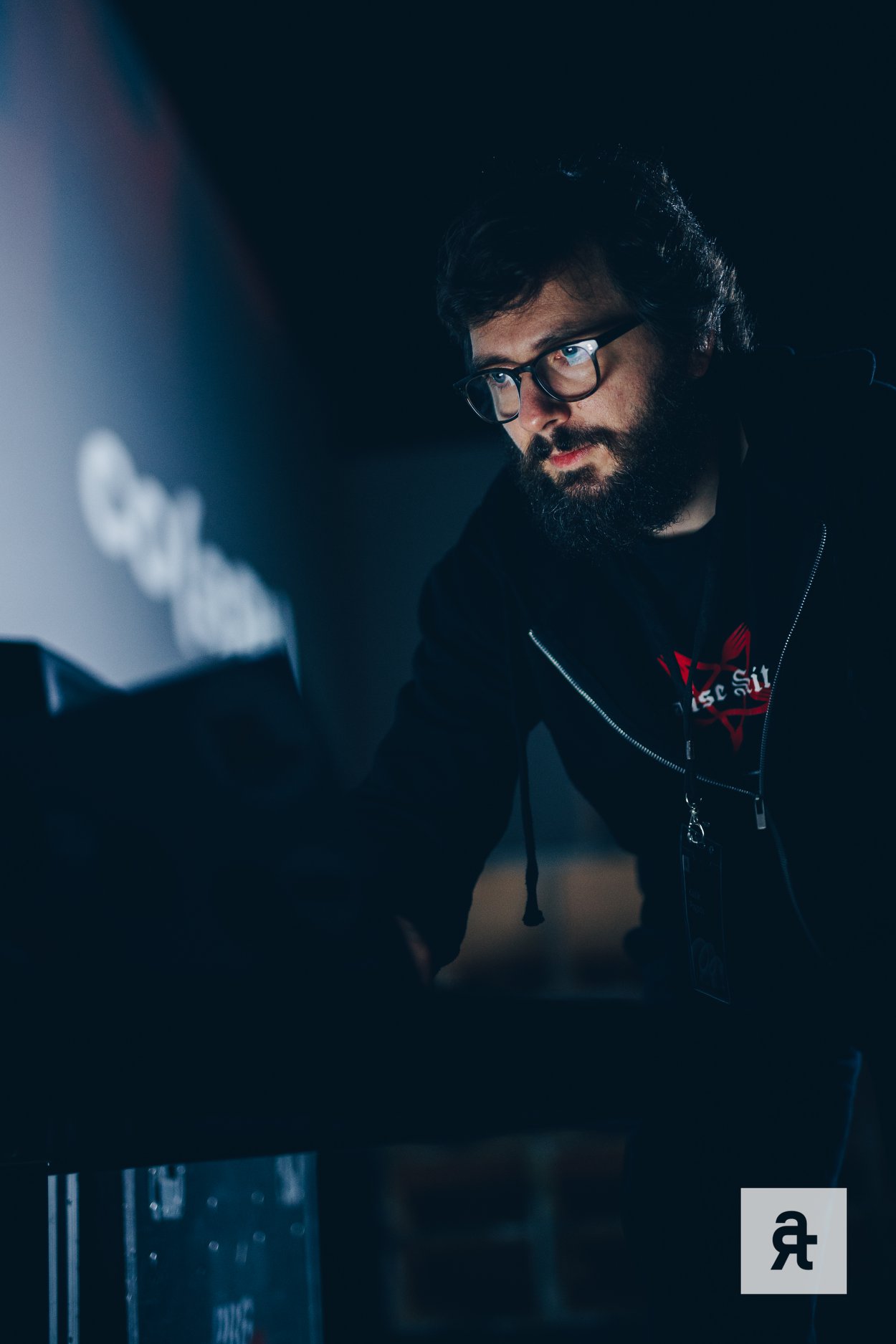 He wants to evoke emotions with generative imagery. It is never drawn nor modeled, but always expressed directly in the code and mathematics. Therefore his process becomes closer to kabalistic meditation visualizing his philosophical beliefs, expressed in real time immersive experiences sensing the space, sound and human bodies.

Kazik started working with creative technologist very recently. He majored in philosophy and has years of experience with software architecture and development. He is also involved in animal rights activism and LGBTQ+ activism in Poland. Inspired by evolutionary processes extended from pure biology to the context of culture, organic forms in digital art, emergent properties of complex systems and study of natural color models. He is on a personal deconstructive journey of experiencing the surreal in reality. Since his childhood in communist Poland he has been reflecting on being an ape during the period of emerging symbiosis of humans and digital machines.